Units Back in Quarters: 1630 Hours

Summary of incident: Fire units were dispatched to a reported fire in an apartment at 52 Marlboro Street. As units were preparing to respond from both Keene stations dispatch updated Car 4 (shift commander) they were taking calls of people reported to be trapped in the building. Keene Police units soon confirmed a fire with heavy smoke showing. Fire units arrived within 3 minutes reporting fire showing from the second floor of a multi-unit 3- story apartment building. Car 4 requested the second alarm and reported first alarm units would be performing search and rescue. On arrival of Car 1 at 1146 the 3rd alarm was requested

First alarm companies including Car 4, E1, Ladder 2, and Ladder 1 with the assistance of Keene Police performed aggressive and efficient operations to safely evacuate and remove all occupants from the hazardous area. Crews simultaneously established water supply, performed search and rescue operations while also getting the fire knocked down in the fire building.

The additional crews from the 2nd and 3rd alarms assisted with fire control, water supply, search and rescue, salvage operations,
re-hab support of crews and provided medical care of those injured.

Estimated Property Loss:  $75,000 fire damage on two floors in two apartments. Smoke and water damage to some of the other units in the building. 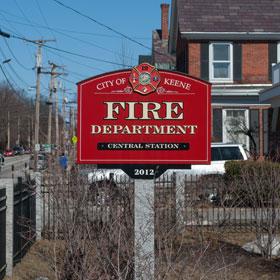